Kazakhstan is committed to political reform

Kassym-Jomart Tokayev is president of Kazakhstan.

“There is no future for a people who deny their past,” cautions a traditional Kazakh proverb.

Kazakhstan is a developing young democracy, but it is both proud of its history and determined to forge a new role in the world.

For many in the West, January’s mass protests in Kazakhstan impacted the record of my country.

The protests arose from an understandable frustration among our people with the status quo and a sense that radical, lasting change had to be undertaken with urgency. This was leveraged by hostile actors, who sought to bring down the government for self-interested reasons.

We have learned hard lessons from January and are taking practical steps to overcome challenges emerging from inside and outside the country.

I am intent on turning Kazakhstan into a state that listens to the needs and aspirations of its people and that is receptive to the popular will and that advocates for all citizens, especially the poor, marginalized and vulnerable. January’s protests showed how years of economic inequality and political absolutism had left many in our nation alienated and angry. 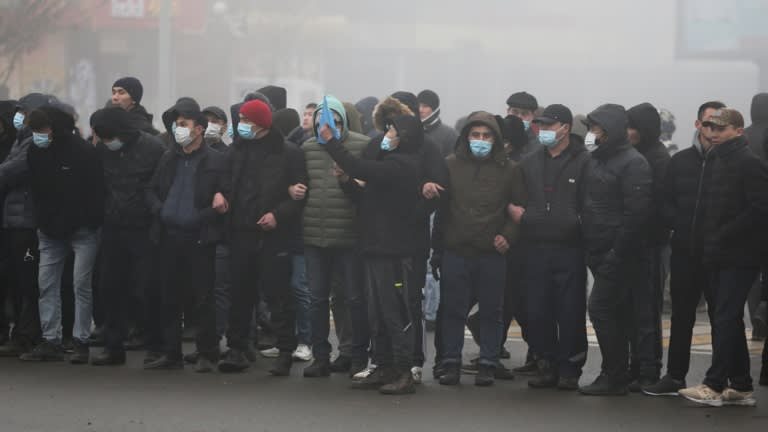 Demonstrators in Almaty on Jan. 5: The protests arose from an understandable frustration among people with the status quo.   © Reuters

In September, I addressed the people of Kazakhstan on major proposed political reforms. Many of the changes were already overwhelmingly endorsed by Kazakhstan’s electorate in a nationwide referendum on June 5, held under monitoring by the Organization for Security and Cooperation in Europe and other independent international observers.

This ambitious reform program, as we demonstrate the tenacity and courage to complete it, will transform our country. Political power will be decentralized and wielded responsibly — always tempered by the rule of law — and the fruits of a diversified economy will be transparently and equitably distributed.

The substance of the reforms is designed to dismantle the previous super-presidential system and construct a more participatory and inclusive democracy in its place. New powers for our parliament, the removal of prohibitions on the formation and registration of political parties, and a single seven-year term limit for presidential tenures, accompanied by a ban on a president’s relatives holding key positions, constitute vital tenets of the reform program.

Added to these measures, we are intent on judicial reforms to assert the independence of the judiciary from both government and law enforcement, thereby guaranteeing fairness and transparency, as well as universal access to justice.

It cannot be right for one citizen to be elevated above the rest and have special privileges under the law of our land. This goes against our spirit of equality under the law.

Kazakhstan’s younger generation is demanding economic opportunity and a more open and inclusive state, which is itself to be governed by popular sentiment.

Should our reform agenda be fulfilled, opportunities for Kazakhstan are practically limitless. Our nation’s geographic status as a bridge between East and West makes us a key connector between developed European economies and their rapidly expanding Asian counterparts, a corridor through which the world’s goods and ideas can pass.

A highly educated and motivated population has equipped us to build a sophisticated, high-tech economy to complement our country’s abundant natural resources and traditional industries, creating an intellectual and technological stronghold in the heart of Eurasia.

The road to democracy is paved with action, not mere rhetoric, and we do not expect our country’s evolution to be uncomplicated or easy. Mature democracies do not emerge spontaneously or instantaneously. They are the product of consistent, unrelenting work and ever-renewing commitment.

I believe that we have set out a comprehensive and effective plan to transform Kazakhstan and that the reform program reflects the needs and desires of our population.

I have a relentless focus on ensuring that we build a better, fairer and more just Kazakhstan and ensuring my country works better for its population.

I am not focused on my personal legacy, or on politics for the sake of politics. My only concern is to serve my people more effectively and make Kazakhstan fairer and more

G20 in Bali to collaborate to respond to global threats

Andrey Medvedev: How Russian mercenary says he made an icy escape to Norway

The assassination of Colonel Boqir